The first paid expansion for the hit war game Battlefield 1 is out today. Customers who bought the Premium Pass will be able to play the new DLC, entitled They Shall Not Pass, while everyone else will have to wait until March 28th.

That Premium Pass, which some gamers are using for early access to the expansion, is $50. Buying the DLC alone is $15. These prices are in line with what DICE has charged for their other expansions, including similar expansions on Star Wars: Battlefront.

There are some new additions to the game in this DLC. The biggest is the addition of the French Army. Since the game takes place during WW1, their addition to the game is only appropriate. When the French were left out of the game after its initial release, many gamers were angry and threatened to boycott the game. This turn forced DICE to announce that they had saved the French for the game’s DLC. Tempers have died down since then, and the DLC is expected to do very well this month.

The DLC also provides a few new maps, including some of the biggest battles of World War 1. The Battle of Verdun and the Battle of Soissons, in particular, have been showcased in the lead up to the release. Two other maps will feature close quarters battle in Fort Vaux and and the trenches of Rupture.

Speaking of trench warfare, the Trench Raider will be a new elite class unit added to the battle in this expansion. This soldier is armed with a Raider Club weapon for hand-to-hand combat, and a poweful grenade arsenal for taking out enemy soldiers in the trenches.

They Shall Not Pass also expands the number of ways you can play Batllefield 1. The new game mode, Frontlines, features objectives both teams fight over in a tug-of-war style. When a team gains an objective, the next one is slightly closer to their opponent. The goal is to push the front as far forward as you can. The other new game mode for Battlefield 1, Operations, will also gain two new maps: The Devil’s Anvil and Beyond the Marne.

With all these new places and ways to fight, players will need some new ways of blowing each other up. And They Shall Not Pass has just the thing. Five new weapons (1/4 of the total promised once all the Battlefield DLC is done) have been added to the arsenal in this expansion. The Ribeyrolles 1918 automatic rifel, the Sjögren Inertia shotgun, the  RSC 1917 rifel, the Chauchat light machine gun, and the Lebel Model 1886 sniper rifel are all brand new weapons for the game. The DLC will also feature the Mle 1903 Extended, a variant on a weapon already available in the game.

For players who aren’t into carrying their guns around, there are two new options. The St. Chamond tank- one of the most heavily armed tanks in all of World War 1- will be joining the frey. This heavily armored tank will certainly help players escape enemy assault. Then there’s the Char 2C. This French machine of war is a havily armored behemoth is designed for five players. With four operational guns on all sides, it’s a remarkable combination of offense and defense. 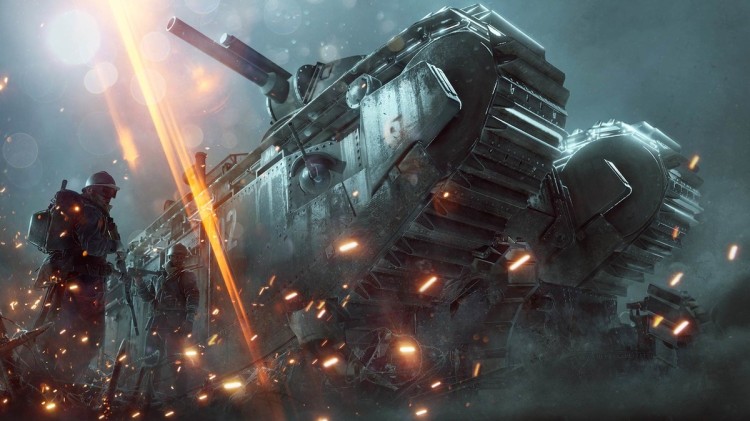 Finally, there’s the Siege Howitzer. This stationary gun can provide long distance support fire at an alarming rate. And, with each round dolling out a significant amount of force if aimed correctly, this gun will be something to watch out for on the battlefield for sure.

Battlefield 1 is also getting a patch today to improve game play for all players. Online play, including access to They Shall Not Pass started up on schedule early this morning. Players who do not currently have the game or Premum access to the DLC can curretnly buy it at 40% off in the Xbox store.