Call of Duty is a titan of a franchise. Like Madden, there’ a new one every year and they all seem to struggle to be unique. Call of Duty World War II is satisfying, while some parts failed to distinguish themselves from others in the franchise other parts did stand out in a big way.

The campaign for COD WW2 is enjoyable for me. It centers around Red Daniels, our not so silent protagonist, and his squad as they land at Normandy and liberate Paris. Right off the bat, Daniels doesn’t feel as bad ass as Soap MacTavish, but that’s a high bar anyway. Daniels possesses the insane ability to survive way too many explosions, however. Our boy gets blown up… a lot.

The squad leader is Sargent Pierson, model and voice by Josh Duhamel, and the most interesting character in my opinion. We see his role evolve over the course of the game as the war and stress are really getting to him and how he leads. It’s done in a dark and meaningful way. The game attempts the same type of growth with our protagonist Daniels, but it feels a little forced.

Daniels’ small story arc is permanently conquering his fear, as he was unable to shoot a wolf that killed his brother but at the end of the game can dispatch a Nazi who is about to murder his friend. It would almost be a refreshing message if he didn’t already spend the whole game shooting Nazis who were also shooting at him and his friend.

While the campaign has plenty of fast-paced battles that you would expect from a Call of Duty game, the most exciting levels are the ones that make you do things differently. One mission puts you in the shoes of a French resistance fighter as she infiltrates a Nazi headquarters in Paris.

The task requires you, the actual player, to memorize her fake backstory and assignments, as German officers randomly question you. The mission borrows heavily from Inglorious Basterds and also includes an undercover British Officer as your back up, and your very own accent-deciphering Hans Landa clone.

But, how does it play?

Story aside, the single-player campaign for Call of Duty World War II has good mechanics. Health no longer regenerates after a few seconds and instead requires the use of health packs either found or given periodically by certain squadmates. The AI isn’t super bright on normal difficulty, but on veteran, it works just fine.

My favorite change was in melee. Being hit by the but of a rifle no longer does more damage than being shot five times, which is a nice touch. Unfortunately, the game does use quick time events almost like a crutch and features them heavily.

What was most surprising about this game as a whole was how much it borrowed from other sources. Including the Inglorious Basterds mention above, scenes were ripped almost entirely out of Saving Private Ryan. Getting into multiplayer, the most fun game mode is by far “War Mode” which is just Rush from Battlefield.

We also have a brand new hub social space in multiplayer in between matches that sure feels a lot like the Tower from Destiny. These aren’t bad in my opinion, the objective and tactics based nature of War Mode let you use a wider variety of weapons than whatever the current META game is for your standard COD multiplayer.  Headquarters includes fun 1v1 areas and is also a welcome addition. 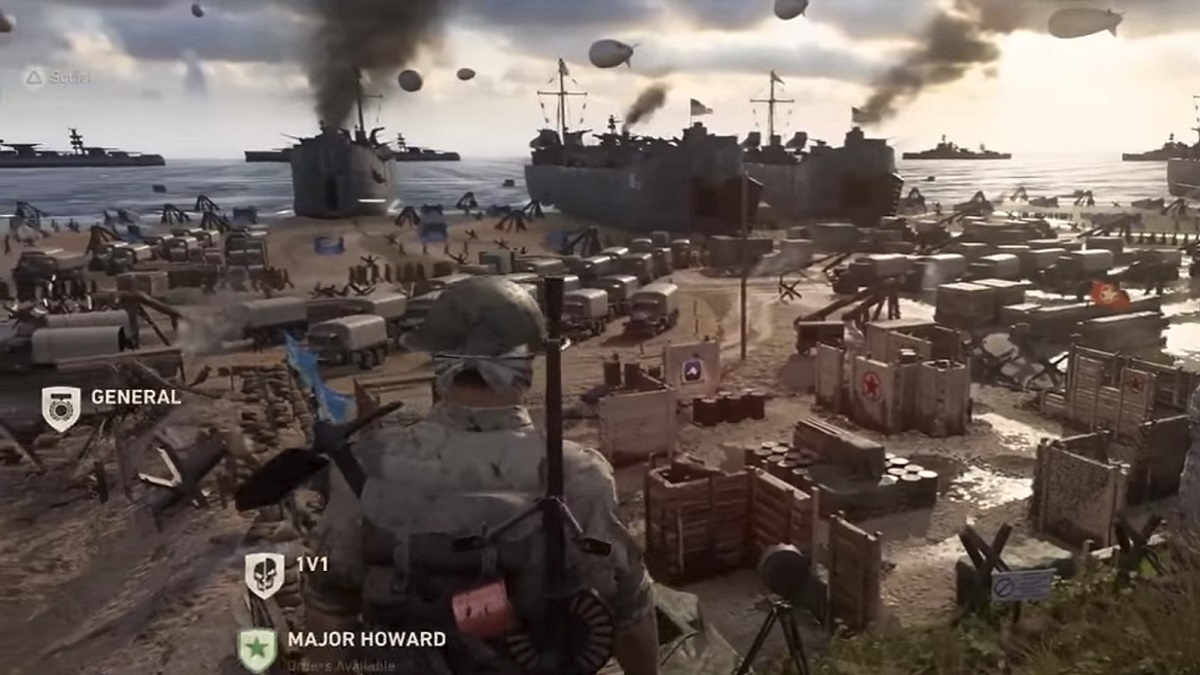 As mentioned above the most enjoyable game mode for me was War Mode, you have an attacking and defending team with advancing objectives that vary from level to level. Standard Call of Duty game modes are also here, and it will all feel very familiar. The health mechanic in the single-player mode is gone, and your character will regenerate health like normal. This being a World War 2 game I was a little bummed to see so many automatic weapons.

While Thompson’s and MP 40’s were real and used during WW2, I was looking forward to slower paced combat with the M1 vs. Mausers. You are free to use the M1 Garand in multiplayer of course. However, you will almost always be outmatched by someone with an automatic weapon and a red dot. This isn’t to say multiplayer in Call of Duty World War II is terrible, only that if you don’t already enjoy the previous Call of Duty games this one won’t be any different.

Call of Duty will forever be fast paced an chaotic.

And finally, we have the ever-popular Call of Duty: Nazi Zombies. This game mode is featured so often it is almost a meme, which is why I was so surprised to see what they’ve done with it. Nikolai and Dempsey are retired, and a new cast has joined the coop. It was great to have David Tenant (Doctor Who) and Ving Rhames (Dawn of the Freaking Dead) both playable and slaying zombies together.

Also new to the mini-game was the ability to preset classes before starting. Nothing major, you are still starting with a pistol, but a little extra customization goes a long way. Also gone are the days where you repair barricades to entrances, and the zombies will now just pile in.

The tutorial to Nazi Zombies was delightful and felt more like a horror game than Call of Duty. Your character is alone in the very wilderness with only a shovel. You quickly find a cabin and firearms, but the atmosphere was spot on, especially when paired with the inability to repair the entrances.

Call of Duty is an enjoyable game. Is it worth the $60.00 price point? Yeah, probably. It’s a good game, and you’ll have fun playing it. Nazi Zombies is still one of the best things to play with a friend on split screen.

Would I bother with the season pass? No. at $100.00 there are better things out there.

Should you invest in their microtransaction loot crates? No, this game wasn’t made by EA.

The Perfect Imperfection of ‘Control’ | Review