Facebook
Twitter
Tumblr
Experts project Nintendo will sell 40 Million units by the end of 2020. This would make it worse than the Wii in sales, but well ahead of the Wii U, which only sold 13 million units. Gamestop’s director of merchandising Eric Bright has even said, “[The Nintendo Switch] could possibly eclipse the Wii.” after examining the system’s first couple of weeks on the market.
In this series, we explore how the Switch can be a mega success comparable to or better than the Wii. Each article explores how Nintendo can compete in different spaces to help the Switch beat the Wii. In the last article, we examined how Apps can enhance the Nintendo Switch experience and although they are unlikely to ever be game changers for the system if Nintendo wants to make gaming a part of everyday life quality Apps are a good way to do it. This article, we will finally focus on games, specifically games that will sell systems and the strategy Nintendo needs to use to have major success. We will revisit the topic of games in a later article to examine indie games and the virtual console, but for now, it is all about the big titles that will get consumers to go out and buy a Nintendo Switch.

As mentioned above, Zelda: Breath of the Wild was the perfect game to launch with the Switch. It would have sold Wii U’s had it only began on that system, moving it to the Switch was arguably Nintendo’s best decision this year. But, Breath of the Wild alone is not enough. Nintendo needs to release as many big name Nintendo titles as they can in 2017 and early 2018 to keep the Switch selling into and past the holiday season. At first glance, it appears that Nintendo understands and is trying to do just this. They have a system seller coming out each quarter of 2017: Breath of the Wild was the second quarter title, Splatoon 2 (some people don’t consider this a system seller, trust us it will be) will launch in the third quarter, and in the fourth quarter Super Mario Odyssey will hit shelves. This is all great but more would be better. Where is the rumored Pokemon game, that Nintendo should be pressing Game Freak to get out this year? Where is Pikmin 4 or a new Metroid game? Here’s to the hope that some of these games will be announced for release at the tail end of the year or to be released in 2018

Luckily Nintendo isn’t only betting on these big titles, but they could be doing more to fill up the Switch’s new game library. Even more ports of popular Wii U games, like Mario Kart 8 Deluxe is, would be helpful in convincing those on the fence about the system to make the buy. Switch versions of Super Mario Maker, Pokken (with all of the arcade content included), and Smash 4 (with all of the DLC and at least the promise of more characters and stages to come). And we won’t even get into the Virtual Console, that will be an article of its own. Nintendo also needs to show us what their new system can do. The new IP Arms is a step in the right direction, but it feels like a game for the Wii. Nintendo needs more new unique IP that is truly innovative, much like Splatoon was. Games that show us why we should care about HD Rumble, and games that put the power of the Switch on display in ways that Breath of the Wild didn’t. New IPs don’t sell systems on their own, but they create buzz keeping the Switch in the conversation, and that inspires confidence. By putting out system sellers, giving the big fans what they want, and innovating unique games, Nintendo shows third party developers that there is a large consumer market on the Switch and that it is worth the extra time and effort to launch games on the Switch as well as other consoles.

On our podcast Nerd It Here Weekly we talked quite a bit about why indie games are a great match for the Switch, and if you haven’t yet you should check out that episode. The “Nindies,” as Nintendo wants people to refer to them, are another way Nintendo can show big third party developers they should get on board and develop for the Switch. Nintendo has already done a great job getting Indie developers on board and has done great showing them that Nintendo is easy to work with. There are a lot of Indie games either coming exclusively to the Switch or coming to the Switch with exclusive content. This is ideal for the Switch and Nintendo because it works to erase a troubled history of Nintendo being difficult to work with for outside developers. It also is a great way for Nintendo to have a full game library that is always growing. Nintendo has stated they aim to have one Nindie launch each week, and doing this will be great for all parties involved. Nintendo will benefit from having new cheaper content available on their sometimes considered expensive system, the gamer benefits from having no shortage of new and unique games to play, and the indie developers benefit from a platform where their games can be seen by the curious mainstream gamer and the non-gamer alike. 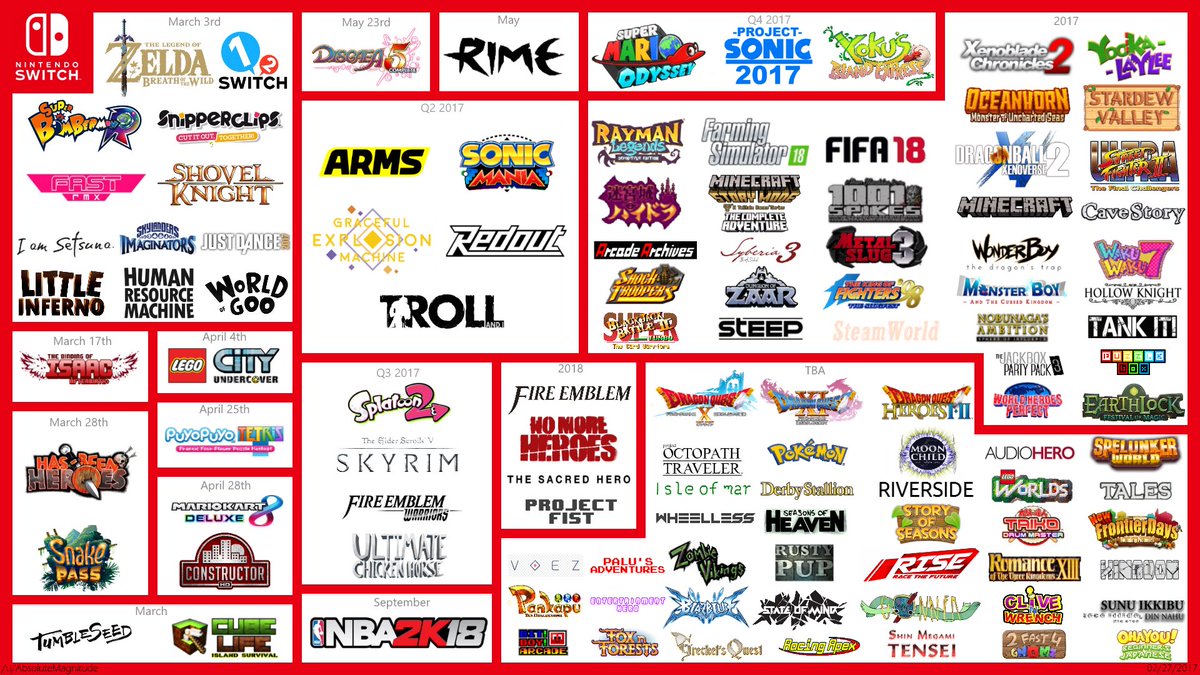 Since the Switch was announced, everyone has been asking if third party developers will support it, and they are still asking. Nintendo has been adamant they have this support, and if they do what we’ve discussed above, they will get the help they need. Why is this support so necessary? Because it will sell the most systems to gamers, who aren’t loyal to just one brand. With third party support players that are deciding between the Switch, PS4, and Xbox One (or whatever Sony and Microsoft have coming next) will choose the Switch because it is the only console that is also portable. The only console where you can play your favorite games on the go, wherever you are! The other question people often ask is if the Nintendo Switch is powerful enough for these games. It is rumored that both of Sony and Microsoft’s next systems’ games are intended to be playable on the current generation of consoles, as well as the new systems themselves at a higher graphics quality. If this is true than developers will already be making their games work at multiple visual quality levels, which is a great sign for the Switch. It won’t be hard to adjust the graphics to port games for Nintendo’s unique system. And if the Nintendo Switch has the consumer base they are projecting, developers will want their games on the system!

Simply put, Nintendo’s plan Switch games should go like this

If Nintendo does this, there will be so many games for the Switch most people will want the system. When deciding on their next console, they will pick the console they can play their favorite games on anywhere.

The Wind is Back | Nerd Numbers