This Wednesday two Super Nintendo games and one Nintendo Entertainment System game will be made available to Nintendo Switch Online Subscribers. For the Super NES Donkey Kong Country and Natsume Championship Wrestling and for the NES The Immortal.  This offering continues to be the best deal for Nintendo Switch owners. The Next Web did an analysis of the release cost of the SNES titles included with the service and it comes out to around $1,700. This is not adjusted for inflation although making such an adjustment would not be the most reasonable given most video games typically depreciate in value over time. [Kotaku]

When Nintendo brought Super Nintendo games to their online service there were two glaring omissions to the package: Donkey Kong Country and Donkey Kong Country 2: Diddy’s Kong Quest. With the upcoming additions only one of these two titles will be missing. Unfortunately for you it is the better of the two, fortunately for me I have them both physically for my personal SNES. I am unfamiliar with the other two titles, so let me know on twitter if they are worth checking out.

A few weeks ago actor Anthony Mackie spoke about the lack of diversity behind the camera in Marvel Cinematic Universe projects. He has plenty room to criticize. Of the 23 films already released 20 have had only white male directors. This last week the Russo Brothers, who have directed most of the projects Mackie has appeared in, responded to the actors remarks in part stating, “he’s not wrong at all.” It is possible Marvel Studios is already learning this lesson; 5 of their next 7 projects will be directed by Non-White or Female directors. [Cinema Blend]

We praise this type of progress here at Nerd It Here First. It is also worth noting that Mackie was not just referring to directors in his comments. He hopes to see more diversity in all facets of the film making process. I focused on directors as a sampler of the crew that works on these projects. 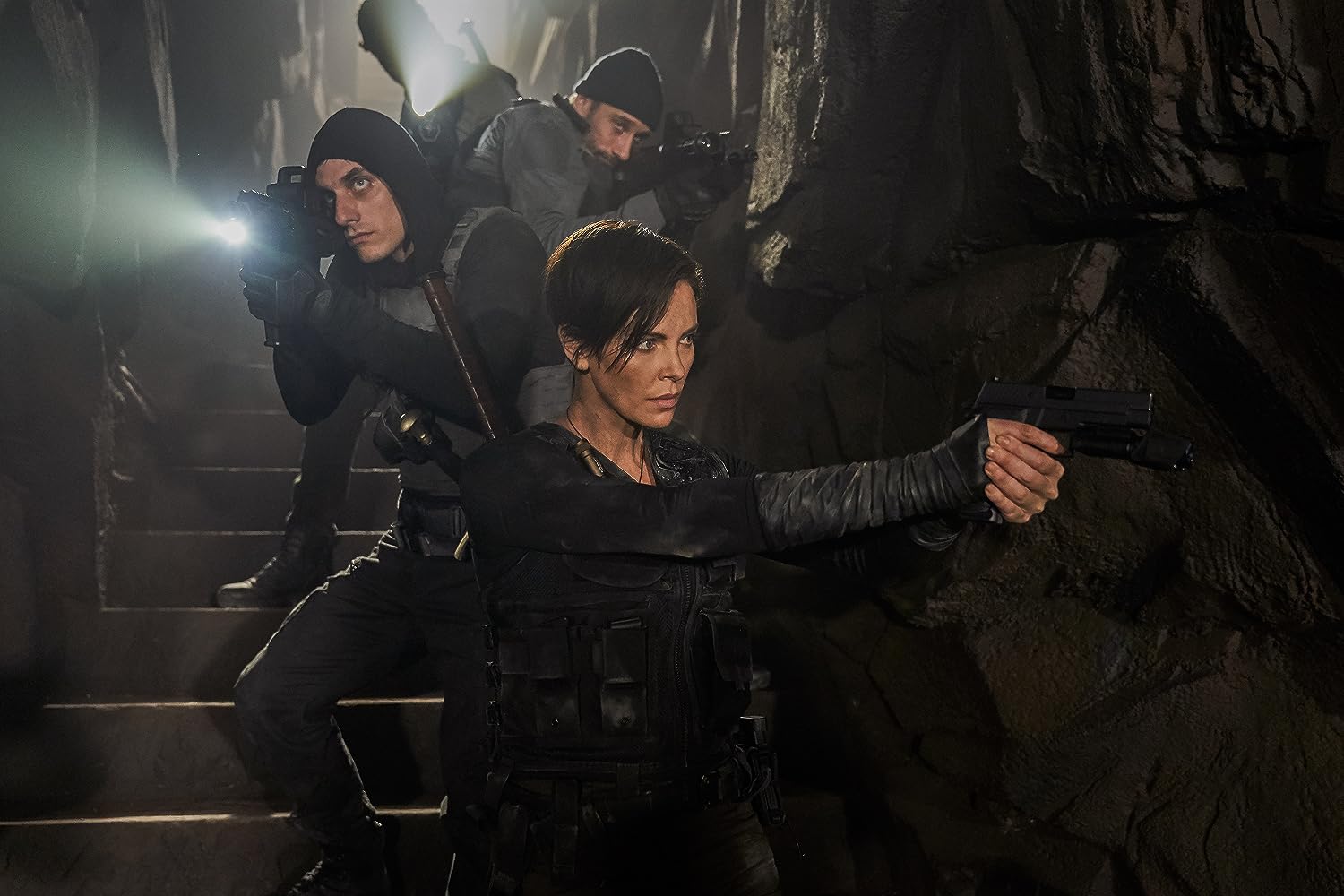 3 out of 4 stars for The Old Guard

NIHF’s very own Deepak Chitnis watched and reviewed Netflix’s The Old Guard. The film served as an interesting introduction to a new comic book inspired world. Deepak praised the pacing, the action sequences, and the acting while acknowledging the films over reliance on exposition. With this being yet another comic inspired story, it seems the best way to get your story on the fast track for a cinematic treatment is to tell it in a comic first. [Nerd it Here First]

I have not seen The Old Guard and I probably will not, it is not the type of movie I typically enjoy. So instead of sharing my thoughts I’ll share the opening summary from Deepak’s review, “The Old Guard is a serviceable, R-rated comic book distraction that Netflix hopes will spawn a franchise. It’s not a bad movie, but it’s mainly buoyed by a strong cast and a handful of well-done action scenes.”

11 Cents for Every Hour of Playtime

Have you ever wondered what game you should buy to get them most playtime for your money? Well according to forward2me’s research Pokémon games are often the greatest in value. 6 of the top ten games with the greatest bang for your buck were Pokémon games, with Generation III’s Pokémon Ruby/Sapphire taking the number one spot. That is if you buy the game at its retail price of $30, today the game typically is sold by resellers for anywhere between $35 and $60. The analysis considered the completionist playtime in its calculations, although Pokémon Ruby/Sapphire topped the list when only counting the main story as well. Other games with high value include Elder Scrolls, Final Fantasy, and Monster Hunter games. Turns out you get what you pay for with RPGs. [forward2me] 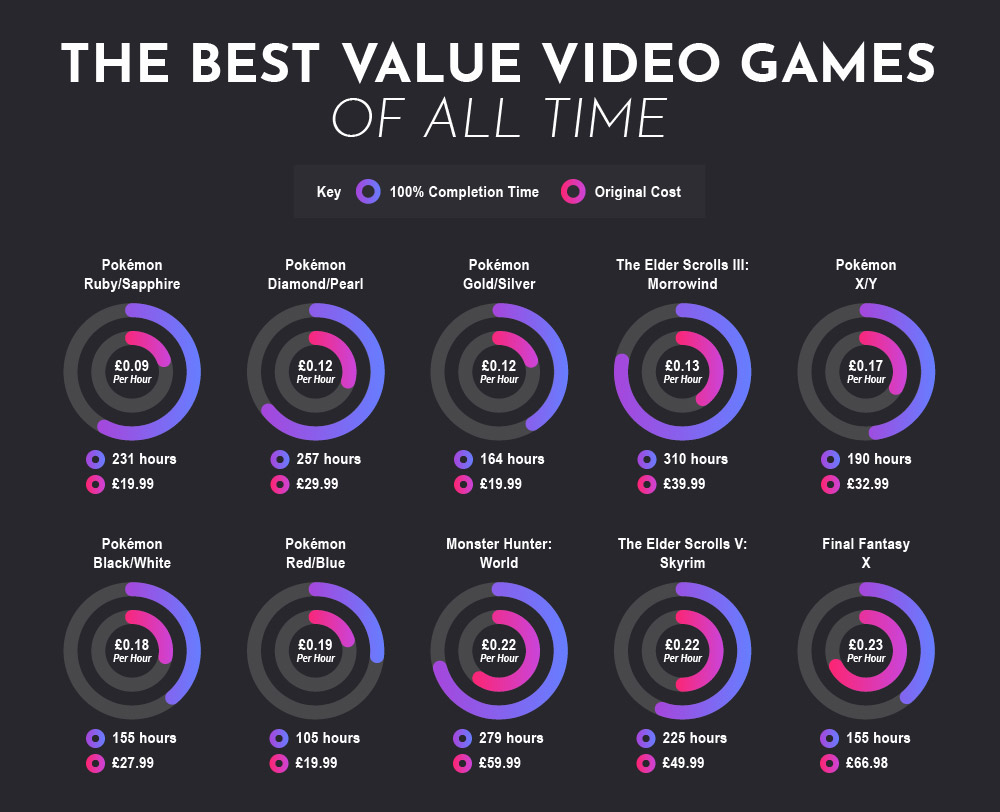 As both an unashamed Pokémon fan and a person that considers the total playtime against price when buying games this makes me both proud as well as satisfied. Truthfully there are no surprises here. I have never 100% completed a Pokémon game, but I also know I have sunk more time into the franchise than any other by a long shot. Also, because I am sure you are wondering, the worst value franchises are Sonic the Hedgehog and Super Mario Franchises. 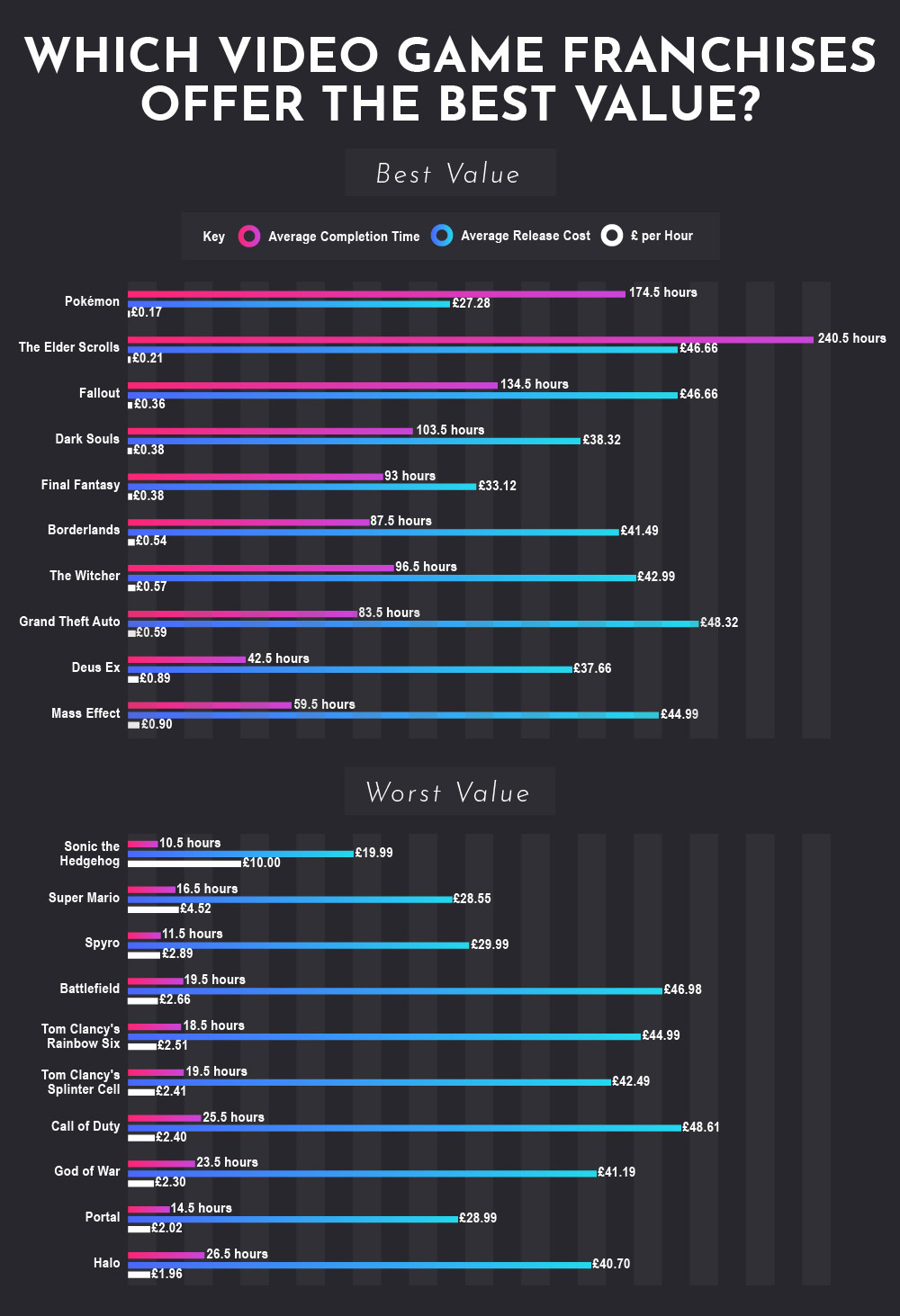