The enduring popularity of the Alien franchise is puzzling, and I write that as someone who loves the Alien movies. The franchise that started off as two instant classics spent nearly 30 years trying to regain that glory. But then Prometheus happened.

In 2012, franchise founding father Ridley Scott returned to direct a quasi-prequel that expanded the mythos of the Alien franchise. There’s an alarming amount of casual stupidity sprinkled throughout the movie. But Scott crafted a story that tied the xenomorphs into a larger examination of man searching for his maker. By the end of Prometheus, he finds him — but was it worth it?

Prometheus brought up fascinating questions. But it’s been a long five years waiting for answers. Alien: Covenant, however, isn’t all that interested in answers. Oh sure, it provides them, but that’s not the movie’s priority. Perhaps as a reaction to the divisive reception that Prometheus got, Scott has regressed, turning a promising first franchise installment into a paint-by-numbers remake of the original Alien. It’s a film at war with itself, trying to return us to 1979 while tying up loose ends from 2012.

Alien: Covenant and the Mythos of Alien

I saw the movie without having seen any trailers or TV spots, nor even watching the Prologue that was released a few weeks ago. The film works best when the audience is going in blind, but for those who require some background: In the year 2104, about ten years after the events of Prometheus, the 15-person crew of the colony ship Covenant is forced to wake from cryosleep after the ship hits a storm-like anomaly in space. (If you’ve seen Passengers, the beginning of this movie will seem eerily familiar.) A strange message from an apparently human source takes the Covenant to a habitable world that appears to have once housed a thriving civilization. Now, there are only corpses, and as the crew investigates the planet, they discover a secret that could kill them all. 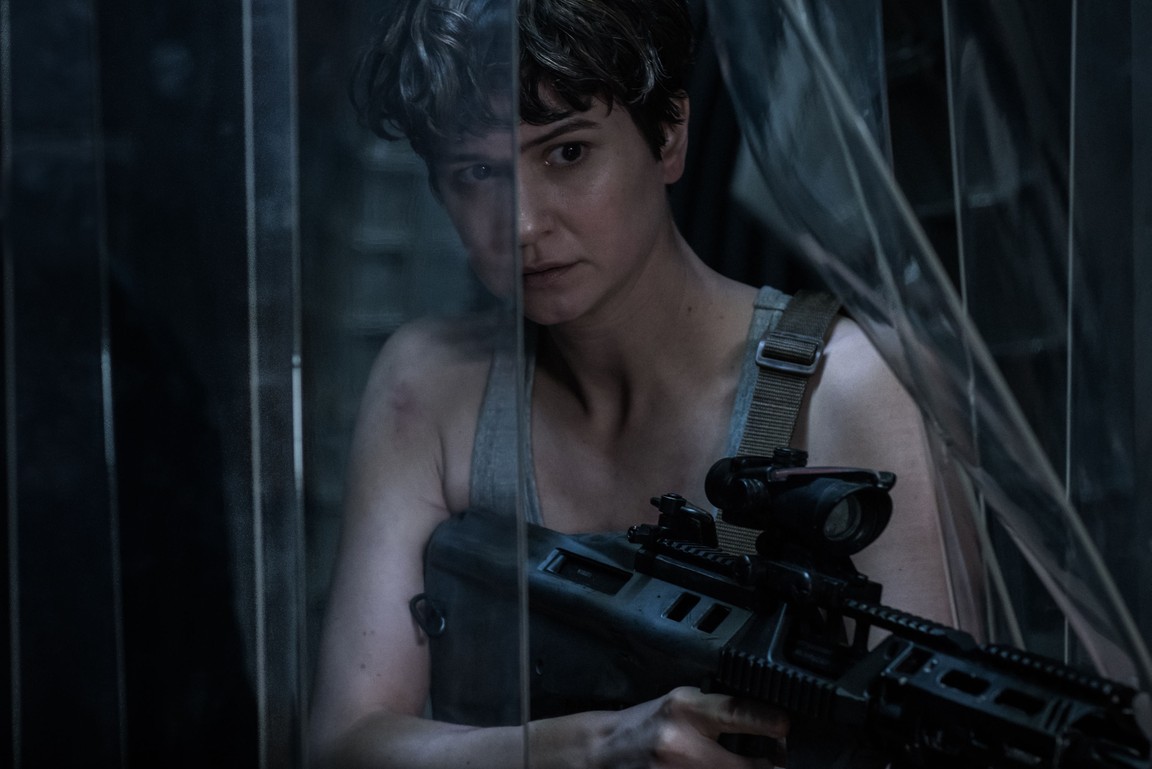 Alien: Covenant opens with a fascinating scene in which Peter Weyland (Guy Pearce, doing excellent work reprising his role from Prometheus) has his first interaction with an Android, which calls itself David (Michael Fassbender). As creator and creation converse, we get a glimpse of the man who set out to meet his maker in the previous film, and why David abhorred him so. It’s a scene that hints at a stronger connection to Prometheus than the film ultimately delivers, and it starts things off on the wrong foot before the title credit hits the screen

When the movie focuses on furthering the story begun in Prometheus, it’s at its strongest. The Alien elements of the film, however, are what ultimately spoil the movie. The biggest transgression is that Scott breaks the rule he helped create: less is more. The xenomorph is at its most terrifying when it’s in the shadows, out of sight, lurking just off-camera. Now, Scott breaks out the computer to show us several different xenomorphs in close detail. Seeing the creature scurry around in broad daylight robs it of its fearsomeness.

The beats of the 1979 film reappear in Covenant to a T; describing it in any detail would ruin the entire movie. People who think The Force Awakens borrowed too heavily from the original are going to experience deja vu all over again with Covenant. But as far as recreating that structure and bringing it into the new century, the film does a decent job. There’s gore aplenty, with some genuinely tense moments. Scott flexes the horror muscle well and engages the gag reflex on at least a couple of occasions. The crew is a mixed bag; about half are memorable, mainly because they’re played by actors we know (and, in one case, a cameo so ill-advised it immediately takes you out of the film). The other half of the cast is xeno-fodder, never gaining a semblance of personality. The Parts of Covenant

As the lead, Waterston is fine. She’s done better work, both small (Inherent Vice) and large (Fantastic Beasts and Where to Find Them). Then again, she doesn’t have much to work with here. Fassbender has the most exciting role and plays it brilliantly, building nicely upon the performance he gave in the previous film. Billy Crudup, Danny McBridge, Carmen Ejogo and Demian Bichir all make the most of their screentime.

The score, unusual for this series, isn’t particularly memorable. We get some references to the old Goldsmith score and a bit of that Prometheus theme, but the new material tends to become background noise more often than not. Visually, the film is aces, merging beautifully with the stunning production design. The quality of the visual effects, however, isn’t as impressive.

It would be easy to say that this is a movie for people who didn’t like Prometheus. But Covenant flouts the rules of the franchise in ways that seem make it more of a Prometheus sequel than an Alien prequel. The bizarre ending to the film doesn’t leave as many unanswered questions as Prometheus did. But it does leave the door wide open for further adventures.

All I hope is that Scott — or whoever else might take over the franchise — restores some clarity to this world. Covenant, like its predecessor, deserves credit for ambition; unfortunately, perhaps even more than Prometheus, it struggles to find the right balance.

Getting Wet and Wild With ‘Maneater’ | Review