As any comic fan can tell you, making even the smallest change to the mythos of a comic book character comes with a lot of risk. Die hard fans on the internet are likely to be angry with the decisions you’ve made, and reject your product as a consequence. But Telltale, who have always made their mark by sticking close to the source material, are really striking out their own course for this Batman adaptation. And it is kind of amazing.

At the end of Season 1, Episode 1, entitled “Realm of Shadows”, we were presented with a horrifying possibility. Thomas Wayne, we were told, was crooked. As bad as they come. The head of the most powerful crime family in Gotham. Say it ain’t so, Telltale! Please give us an episode 2 wherein Bruce uncovers the truth behind this lie.

The twists and turns that the game takes through the episode are truly exhilarating. The decisions by the game designers to eschew customary elements of the mythos in favor of new creative aspects that are wholly original is rarely if ever seen in comic book media today.

In fact, they did the exact opposite. They doubled down on the assertion that Thomas Wayne, the man who inspired Bruce to become Batman was in fact a corrupt businessman who was only ever looking out for his own self interest. And while we still have a long way in this season of the game to go, and none of the mysteries that began to unfold in the first episode have concluded themselves yet, the Thomas Wayne scenario is not the only area where Telltale has made themselves comfortable reinventing the Batman story. 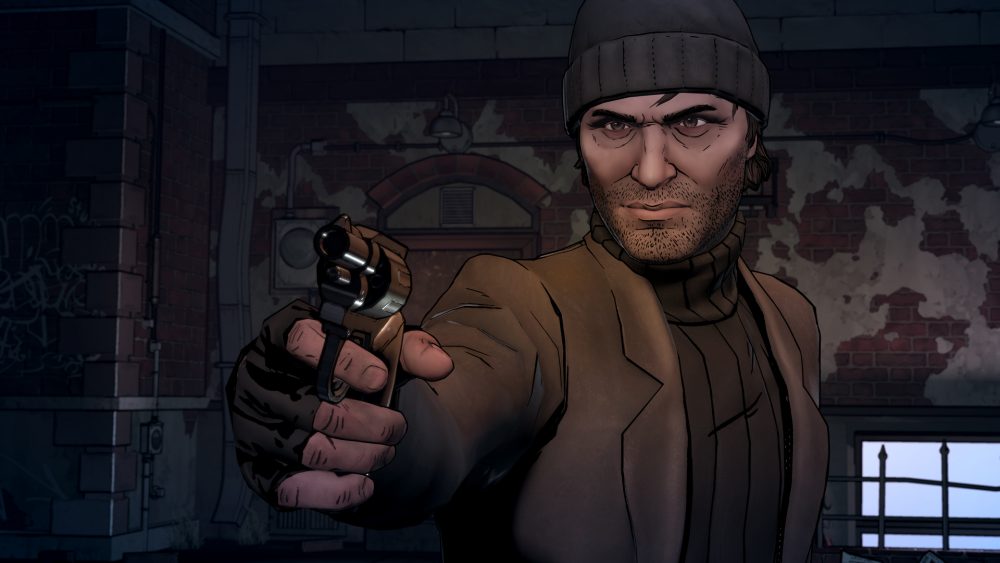 The death of Thomas and Martha Wayne was not a random mugging but was, in fact, an assassination. Oswald “Oz” Cobblepot is an enigmatic young revolutionary known widely as the Penguin for no discernible reason other than that it’s a cool sounding name. Add onto that a corrupt Mayor Hill, who is working with Falcone and Thomas Wayne and a mysterious shadow group calling themselves the Children of Arkham, and you almost need to see a guy in a bat suit running around every once in a while just to remind yourself what it is you’re actually playing.

Except for that old familiar sense of urgency that Batman always has when he is at his best. The episode begins with Bruce and Alfred, in Crime Ally retreading the Wayne family murder once more. Joe Chill, The Mask of Zorro, Martha Wayne’s broken pearl neckless. At this point in our cultural morass even people who have never seen a Batman movie could probably recite the details of the crime to you from memory. But then Telltale presents us with an interesting twist. The crime wasn’t random. It wasn’t a mugging. It was a targeted assassination on high level crime bosses by a friend who may have become the competition: Carmine Falcone.

Bruce heads to the police station, with his friend and mayoral candidate of choice Harvey Dent (I hope nothing goes horribly wrong to ruin his chances of becoming mayor!) to put the question to Falcone. And after a bit of needling- your milage will vary on exactly how much needling depending on the choices you make in the game- Falcone says that Bruce and he are like family. And just when he’s about to give up the secrets of the Wayne family’s involvement in organized crime, he is shot by one of Police Lt. Gordon’s uniformed officers. 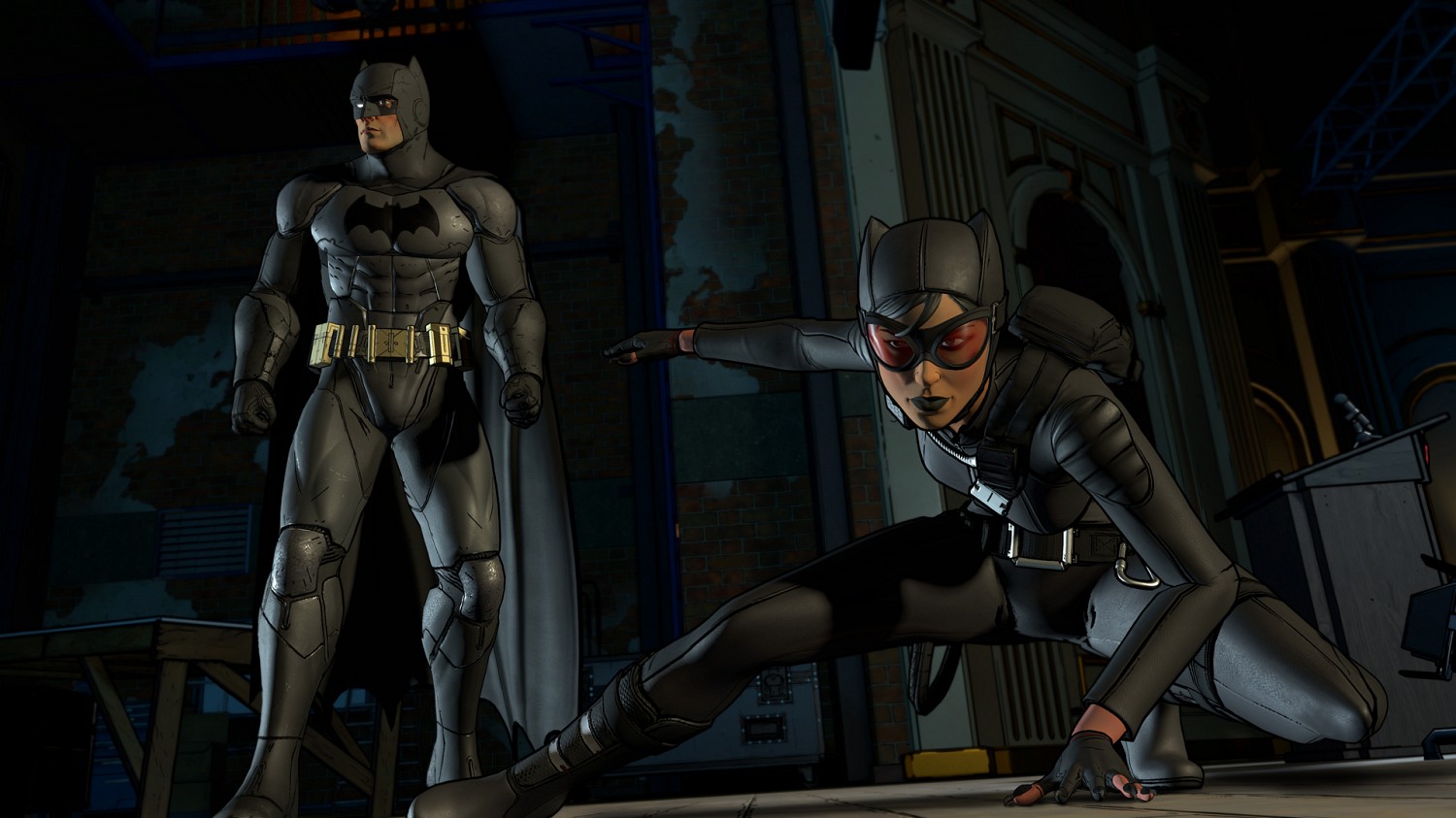 In a holding room a short time later, Lt. Gordon, DA Dent, and average guy with no interest in crime fighting whatsoever Bruce Wayne are trying to figure out what to do about the officer in question. Layers and reporters are knocking at the gates. They won’t be able to avoid this P.R. nightmare forever. And when Gordon and Dent go out to try and contain the fallout, that’s when Bruce realizes that the officer was injected with an unidentified chemical.

The same unidentified chemical, in fact, as was found at the site of the massacre at the docks in Episode 1. Recognizing that this means that Bruce Wayne’s personal friend Oz Cobblepot is involved, Batman teams up with Catwoman to try and get some answers. After a conversation with the Mayor that can go one of two ways depending on if the player sends Bruce Wayne or Batman to get answers, and a back-to-back bar fight with Catwoman against a crowd of thugs who never stood a chance, the two find themselves at the debate between Dent and Hill.

Just as Bruce suspected, the debate is attacked by Cobblepot, wearing a penguin mask to disguise his real identity. What Bruce, or anyone for that matter, could not have seen coming was that Oz is now working for a group called The Children of Arkham. And before Batman can find out more about this group we’ve never heard of before, he is forced to save one of two people who are very close to him, with some lasting results for whomever he neglects.

The twists and turns that the game takes through the episode are truly exhilarating. The decisions by the game designers to eschew customary elements of the mythos in favor of new creative aspects that are wholly original is rarely if ever seen in comic book media today. The reason is a simple one: consumers are easy to scare. They’ve been burned by new too many times before and would much rather have the same Batman v. Joker story rehashed to them 1,000,000 times is it means a quality experience instead of risking a bad story and the future of the franchise on something unknown.

The originality of Telltale’s rendition though, is not a weakness. That must be repeated because so many members of the comic book community, so many fans of the DC Universe in particular, cringe when they hear that the Flash’s costume will be different in the movie than how Carmine Infantino drew it when he worked on the comic.

This game is fantastic. It is original, completely unpredictable, and a joy to play when new episodes are available. Telltale has done what Scott Snyder and Greg Capullo did with their run on the character in the New 52- they have proven that new stories that revolutionize the character are an exciting and unusual way to respect the character at every level.