In the near future, the Earth’s energy resources have been nearly depleted. In a last-ditch effort to save the planet, an international crew — played by Gugu Mbatha-Raw, David Oyelowo, Daniel Bruhl, Elizabeth Debicki, and Chris O’Dowd, among others — mans a space station in order to create a sustainable Shepard particle accelator, which would create an unlimited energy supply for mankind. But repeated testing inadvertently sends the space station into another dimension. As strange occurrences start to pile up, the crew has to race against time to find a way back home before it’s too late. 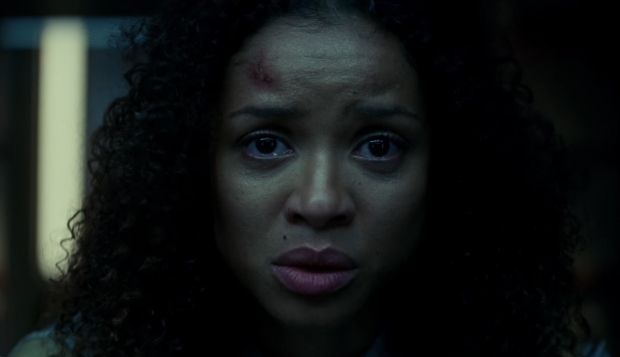 At one point destined for a theatrical release by Paramount Pictures, rumblings of a possible Netflix berth began surfacing in recent weeks. All the hype came to a head during Sunday night’s Super Bowl, during which it was revealed that The Cloverfield Paradox would not only debut on Netflix, but would do so in a matter of hours — right after the game! That level of marketing bravado is unprecedented in movie history, and may have provided a short-term victory for the streaming giant, but unfortunately, this is yet another case of a Netflix original or Netflix-acquired movie simply not being worth the excitement.

The Cloverfield Paradox is an uninspired genre mashup that takes inspiration from several other movies — Alien is the most obvious, along with last year’s superior Life, and a little bit of Danny Boyle’s remarkable Sunshine — but does nothing inspiring with those elements. Director Julius Onah proves unable to invigorate the proceedings with any kind of tension or excitement, but in his defense, the script by Oren Uziel (from a story by Uziel and Star Trek Beyond co-writer Doug Jung) doesn’t give him much to work with.

Character development is virtually nonexistent, with everyone being identified early based on a single defining characteristic and never really being allowed to grow beyond that (which is an unfortunately common issue with movies like this — see last year’s Alien: Covenant). Mbatha-Raw’s character comes the closest to achieving three-dimensionality, but her backstory is so overwrought and unoriginal that it’s hard to care.

The Cloverfield movies have been hit-or-miss in general, but both the 2008 original and 2016’s 10 Cloverfield Lane were directed with panache and style, clearly bearing the mark of their respective helmers. There’s nothing like that in The Cloverfield Paradox. There’s a reason this went straight to Netflix — it’s got “made-for-TV” written all over it.

The stellar cast is left flailing in the water without being given much to work with. No one’s ever really bad — in fact, Mbatha-Raw, Bruhl, and Oyelowo are pretty good, while character actors like O’Dowd and John Ortiz are their usual reliable selves — but no one ever rises above the mediocrity of the material.

The movie itself looks very cheap, with dodgy visual effects and flat cinematography from the usually reliable Dan Mindel (Star Wars: The Force Awakens). An unremarkable score doesn’t help, either. Editing does its best to keep things moving along, but despite how short the movie is (just over an hour and a half), it still feels like it goes on for too long. A couple of nice scares are done mostly practically, which is nice to see.

The Cloverfield Paradox will likely be remembered more for its innovative marketing and launch than for the film itself, which is about as rote and repetitive a sci-fi movie as I can remember seeing recently. Thankfully, it’s on Netflix, so it doesn’t require you to spend money driving to the theater and paying for a ticket. If you’ve got nothing going on one night, it’s easy to check out, and there is at least one genuinely nice little moment at the very end of the movie (which is really the movie’s main link to the larger Cloverfield franchise). Too bad that even if you’re not spending any money, you won’t get your time back.