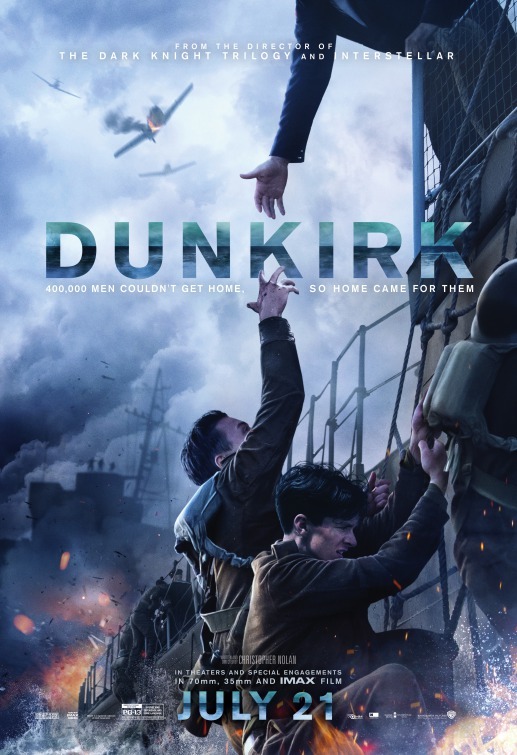 Christopher Nolan has made a career out of filmmaking on a grand scale, working his way up from a small black-and-white film about a con man on the streets, to stories about superheroes saving cities from nuclear bombs and astronauts traveling through time to save humanity. For his latest film, Nolan takes a step back, turning to recent history and crafting a recreation of one of World War II’s most stunning rescue operations. But while Nolan’s skill as a master craftsman remains peerless, the fundamentals of storytelling suffer, leaving Dunkirk as more of a missed opportunity than a rousing wartime thriller.

Dunkirk recounts Operation Dynamo, an effort led by the Allies to evacuate primarily British and French troops from the beach of Dunkirk, France after German forces had cornered them by land and air. The film has three distinct vantage points that only superficially tie together. The first is that of The Mole, which details a young British private’s (Fionn Whitehead) efforts to get off the beach by boat. The second is the story of The Sea, which follows a British citizen (Mark Rylance) as he, his son, and a young boat hand leave England for Dunkirk when the government requisitions private boats for the salvage operation. Finally, there is the story from The Air, in which a handful of Royal Air Force pilots (among them Tom Hardy) try to keep their compatriots on the beach safe from harm by shooting down any Germans that come their way.

Not only are these stories only ever loosely connected, but their chronology is staggered, giving the proceedings a Tarantino-esque feel as we see certain characters at various stages of the rescue in a nonlinear fashion. Unfortunately, this doesn’t add anything to the narrative. It’s not confusing, but it isn’t all that helpful either, and one wonders what Nolan was trying to accomplish with this.

Dunkirk Fails to Tell a Story

Furthermore, characters don’t hold up especially well. That is by design, as we’re consistently “in the moment” of the rescue. There are no flashbacks to fill in these characters’ lives before they go off to war, so we know these men only so far as their involvement at Dunkirk. While this is admirable from a storytelling perspective, to keep the tension high by not removing the audience from the situation as it unfolds, it makes it impossible to care about anything that’s happening. Other films that have covered relatively recent events have overcome the hurdle of knowing what happens by giving us characters we care about; without that, Dunkirk never actually becomes more than a recreation of events, rather than a narrative we’re expected to care about.

Nolan’s thematic targets are also unclear, with blindness playing a key role at certain moments, but with no real purpose. Similarly, a subplot about a horrific accident that befalls a young man in a heat-of-the-moment argument culminates in a tepid emotional beat at the very end of the picture that adds little. The editing of the movie is laudably tight. It can’t have been easy cutting across three main storylines while servicing them all and keeping timelines straight. However, Nolan’s love of the “heavy-handed monolog playing over a montage of silent character beats” at the end of the film seems particularly maudlin here, especially given the great speech that every audience member will recognize.

Dunkirk is a Technical Marvel

Fortunately, from a technical point of view, the film is nigh-flawless. Shooting primarily on IMAX film with cinematography Hoyte van Hoytema (Tinker Tailor Soldier Spy, Interstellar, Spectre), the film looks incredible, with vibrant colors and contrast adding depth and realism to the image. Sound design is even more amazing, with some of the loudest and most precise mixings I’ve ever heard. Hans Zimmer’s score is relentless and becomes a character unto itself at several moments. Nolan dials back on the dialogue here, with much of the film playing out with only the score and sound effects. Zimmer’s ticking-clock motif, borrowed heavily from his work during the tidal wave sequence in Interstellar, never lets viewers forget that time is of the essence for these characters.

Performances across the board are solid if nothing award-worthy. Familiar faces like Hardy and Academy Award-winner Rylance join the likes of Kenneth Branagh, Cillian Murphy, James D’Arcy, as well as newcomers Whitehead and Harry Styles (yes, him, and he’s quite good).

Nolan fans are a sycophantic bunch, who likely won’t take kindly to my less-than-stellar review, so I suppose I should clarify that I am a fan of his. While a couple of his movies have rubbed me the wrong way, I do think he’s made the two best comic book films of all-time and, aside from some trip-ups towards the end, Interstellar is a sci-fi masterpiece. But Dunkirk just didn’t do anything for me.

Even at a lean 106 minutes, without a coherent three-act structure the film just lurches from event to event, making the film feel drawn-out as a result. Fans of the director and war pictures may get more out of this than I did, particularly those with intimate knowledge of World War II and this particular event, but for general audiences, the appeal of a film like Dunkirk may remain elusive.

Nolan is a talented man who put his heart and soul into this picture. But sometimes, that isn’t enough.