Home Comic Books Everything You Need to Know | Iron Fist

A few years ago, when Marvel announced they were teaming up with Netflix to create a series of direct to streaming shows which would lead up to a miniseries entitled The Defenders, the whole thing sounded like a pipe dream. Well, now we’re 3/4 of the way to the end of that dream, and the Marvel/Netflix team-up continues to excite and amaze. Daredevil, Jessica Jones, and Luke Cage have all been unqualified hits. There’s only one piece of the super-pie remaining. And that’s got everyone asking: Who is Danny Rand? 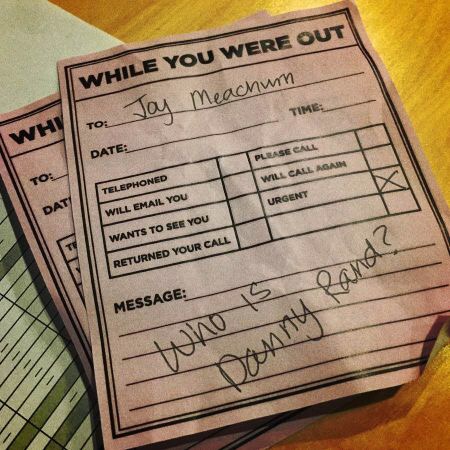 Danny Rand is the creation of Roy Thomas and Gil Kane who first premiered the character in Marvel Premiere #15 in 1974. His origin story, which was told over three issues, was inspired by the Kung Fu craze of the 1970s. A martial arts master, trained in the Far East, the character is rife with the kind of oriental mysticism that would leave modern audiences agape in horror. But rather than shrink from the challenges posed by the character, Marvel and Netflix have decided to take him head on. So, like it or not (and many people do not) this is the story of how Danny Rand, blonde American billionaire, became the most powerful martial arts master in the world.

When Danny Rand was only nine years old, he went on a trip with his parents Wendell and Heather Rand. Wendell and his business partner Harold Meachum were searching for the mystical city of K’un-Lun. The city was the home of the immortals. Wendell knew about the city, and he knew it was nearly impossible to get into. So he was pushing his family to the absolute limit of human ability, climbing up treacherous mountains in the thick snow, to try and find the gateway to K’un-Lun.

What Wendell didn’t know, however, was that his partner planned to betray him. Harold Meachum harbored a deep seeded jealousy towards Wendell Rand. Meachum wanted everything that Harold had. Specifically, he wanted their company to himself, and he wanted Heather Rand to be his wife. So, on their treacherous climb up the mountain, when Wendell Rand slips on some ice and only just manages to grab onto the ledge beneath him, Harold does not help him up. In fact, he watches as his friend falls to his death. Then Meachum turns to Heather and her son and demands that the two come back to America with him and join him as a family.

Clearly Heather refuses, and she and Danny go running off into the snow. But the elements are dangerous, and neither Heather nor her young son was prepared to survive on their own. Nevertheless, the two reach a bridge, and it seems that they are going to be safe. But just as they are about to cross the bridge they are set on by a pack of wolves. Heather heroically sacrifices herself so that her young son can make a run for it. As Heather is set upon and eaten, Danny slips off the bridge and falls into a crevasse. At the bottom, Danny is saved by two mysterious figures and taken back to their village nearby.

When Danny arrives in K’un-Lun, he meets the first of many new allies he will make on his path to become Iron Fist. This man’s name is Yü-Ti. He is in charge in K’un-Lun, and he says that he feels sorry for Danny. Yü-Ti’s heart goes out to Danny, and he says he will give the boy anything he wants to try and make up for the loss of his parents. Danny tells Yü-Ti that the only thing he wants is revenge on Harold Meachum. Yü-Ti tells Danny that he cannot give him vengeance, but he can help him get it for himself. Guards take Danny away and shave his head. Then they deliver him to Lei Kung, a powerful fighter in the city known as The Thunderer.

Years pass and Danny becomes a powerful martial artist. His desire to get retribution for his parents’ deaths drives him. Each day he is motivated by the need to get more powerful to destroy Meachum. But as he becomes more gifted in the martial arts, he learns of more fighting styles. His need for vengeance drives his training, and his training drives his need for revenge. As the years continue to tick by, Danny eventually becomes the most powerful fighter in K’un-Lun.

Having mastered everything there is to learn in K’un-Lun, Danny finally goes to Yü-Ti and asks for one final test. For the final test, Yü-Ti sends Danny to a cave in the mountain. There, Danny comes face to face with a dragon called Shou-Lao the Undying. There are two features about Shou-Lao, other than being a dragon called “the Undying” that make him a particularly

There are two features about Shou-Lao, other than being a dragon called “the Undying” that make him a particularly noteworthy enemy. The first is that he has a mark on his chest, in the shape of a tiny dragon, where his heart was cut out. The second is that his heart, which is made of magma, is now kept in a giant vat in a back room in his cave.

Danny enters the cave, and the two combatants attack one and other. The two fight for a while before Danny realizes that the dragon’s chest scar will be the key to his defeat. Leaping across the cave, Danny wraps himself around the dragon’s body and presses his chest up against Shou-Lao’s. The heat coming from inside the dragon is immeasurable, and it leaves a scar on Danny’s chest that looks just like the dragon’s. But stifling the magical energies pouring out of the dragon has also had another effect. Shou-Lao has fallen, and Danny has become temporarily immortal. 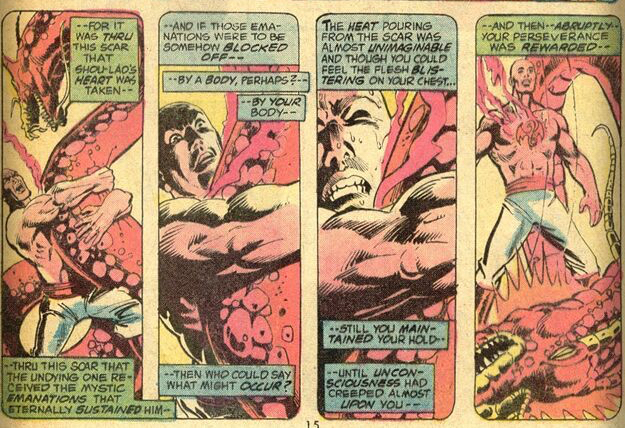 Danny uses his temporary immortality well. He walks into the back room and begins to punch Shou-Lao’s heart. He hits the heart over and over again. As he punches it, the Chi energy in the molten heart starts to transfer to Danny’s fists. The possession of that Chi energy makes Danny into Iron Fist. His fists are now as hard as iron, and his body is a living weapon.

When Danny returns to K’un-Lun, Yü-Ti gives him a choice. If he wants, he can eat the fruit of the immortals, and live in K’un-Lun forever. But Danny still wants his revenge on Meachum. So Danny passes on his chance at immortality. Instead, Danny says he will cross through the portal that separates K’un-Lun from the Earth- a portal that is only open once every 10 years.

Danny is set to depart K’un-Lun. But before he goes, Yü-Ti has some valuable information for him. The first thing he needs to tell Danny is that Danny is not the first Iron Fist. There have been many Iron Fists before him. And one of them was his father, Wendell Rand. That’s how Wendell knew where K’un-Lun was, he had trained there before when he became Iron Fist. The other thing Yü-Ti tells Danny is that Wendell Rand was Yü-Ti’s brother.

So, having discovered that his father was Iron Fist before him and that Yü-Ti is his uncle, Danny returns to Earth to get his revenge on Meachum. In New York City, Danny finds that his father’s company has been completely taken over by Meachum. Danny climbs an office building that bears Meachum’s name. He dodges some traps that Meachum has set up throughout the building. And then, finally, Danny enters Meachum’s office.

Inside, Danny finds Meachum sitting at his desk. Meachum has grown old since the last time Danny saw him. What’s more, he did not make it off the mountain unscathed. His legs were so badly frost-bitten that Meachum had them amputated. Meachum greats Danny as a friend and tells Danny that he is ready to die. He asks Danny to kill him. But instead of being driven by rage, Danny feels pity for Meachum and leaves, letting him live.

Randall trains Danny to become even stronger. He also teaches him about all the former Iron Fists.  As Danny learns more about former Iron Fists and as he trains with Randall, he becomes stronger than he ever thought he could. He becomes an unstoppable force of justice on the streets. He begins to use his powers to fight crime and protect people on the streets of New York City. 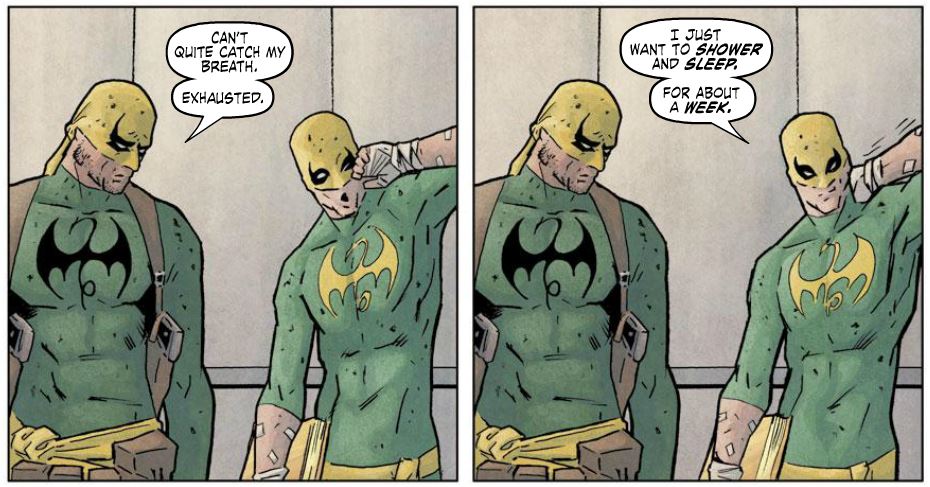 But Randall is old and he cannot continue the fight forever. So, as one final act of heroism, he makes Danny even stronger by transferring all his Chi energy to Danny. Without his Chi energy, Randall dies.

Danny would go on to become one of the most prolific crime fighters in New York City. Working with Luke Cage, he would be come half of the super-powered duo known as Heroes for Hire. Later on, he would team up with Doctor Strange and The Defenders to become an intrigal part of that team. There was even a short time during the Marvel Civil War where he was Daredevil.

All in all, Danny Rand is one of the most famous and most intersting characters in the Marvel comics universe. His character background is as exciting as his adventures or his partners. And while the Netflix adaptation of his comics may not be up to par, his storys are always great on the page. For those looking to get into Iron Fist, we’d recommend starting with The Immortal Iron Fist, Vol. 1: The Last Iron Fist Story by Ed Brubaker and Matt Fraction.

What do you think? Do you love Iron Fist? Are you excited to see Danny Rand come to Netflix? What’s your favorite team Danny’s been a part of? Let us know in the comments below. And be sure to follow us on Facebook and Twitter for more Iron Fist news, including our review of Marvel’s Iron Fist on Netflix.