Home Television We Need To Talk About Finn Jones

Finn Jones is back in the news this week. The actor, who plays Danny Rand in the Marvel/Netflix series Iron Fist, became the victim of Internet scrutiny after he made some bold claims about the negative reception the series has received. The primary focus of the scrutiny aimed at Jones is over issue of representation in the Netflix series.

Last week, Finn Jones decided to suspend his Twitter account after he came under fire for comments he made about the role of race in Iron Fist. The series draws on a Marvel comic book series of the same name. The story centers on a white character who trains to be a martial arts champion in Asia before returning to his home in New York. While the comic series was more at home in the 1970s, many critics have pointed out that the series runs the risk of adhering too much to the model of the “white savior.”

As I write this, I am 4 hours away from being able to watch any of Iron Fist. And given the current Rotten Tomatoes score, I’ll wait until the morning instead of trying to pull an all-nighter. My point is I have not yet seen the show. Judging it based on the source material then, Iron Fist as a story does not play directly into the trope of the white savior, but it does not steer far enough away from the idea to make today’s audiences comfortable either. Matthew W. Hughey wrote

A White Savior film is often based on some supposedly true story. Second, it features a nonwhite group or person who experiences conflict and struggle with others that is particularly dangerous or threatening to their life and livelihood. Third, a White person (the savior) enters the milieu and through his or her sacrifices as a teacher, mentor, lawyer, military hero, aspiring writer, or wannabe Native American warrior, is able to physically save — or at least morally redeem — the person or community of folks of color by the film’s end. Examples of this genre include films like Glory (1989), Dangerous Minds (1996), Amistad (1997), Finding Forrester (2000), The Last Samurai (2003), Half-Nelson (2006), Freedom Writers (2007), Gran Torino (2008), Avatar (2009), The Blind Side (2009), The Help (2011), and the list goes on.

Based on my experiences with Iron Fist comic books, Danny Rand does not match any of these definitions. But he is far too close to too many of them for me to feel comfortable trying to defend the show, without having watched it. And this is where Finn Jones is getting himself into trouble. His fixation on the definitional meaning behind what somebody is saying seems to blind him to the actual feelings of the concerned people.

In this example, it appears that Finn Jones heard someone say that Iron Fist adheres to the white savior trope. Then, he ran the plot line against the definition of the trope. Finally, concluding that the two were not identical in every say, he surmised that there was not an issue. Because of this, he misses the point that representation in Hollywood is skewed towards whiteness. He then seems completely befuddled when people tell him that his remarks are part of the problem.

Here’s another example. After deleting his Twitter for a few days, Mr. Jones stayed safely out of the news for six whole days. Then, this week, he began to comment on the critical reception that Iron Fist was getting online. When Metro.co.uk asked Jones about the claims that his casting was “racially uncomfortable” he responded

“Well, I think there are multiple factors. What I will say is these shows are not made for critics, they are first and foremost made for the fans… I also think some of the reviews we saw were seeing the show through a very specific lens, and I think when the fans of the Marvel Netflix world and fans of the comic books view the show through the lens of just wanting to enjoy a superhero show, then they will really enjoy what they see… I think it’s a fantastic show which is really fun and I think it stands up there with the other Defenders’ shows without a doubt”

There’s a lot to unpack here. Critics have focused in on Jones’ use of the defense ‘it’s for fans, not for critics’. Whether it’s the time of year or the superhero content, many have thought back to Batman v. Superman: Dawn of Justice and Henry Cavill implementing a similar defense for that film. But what really stands out here is the relationship between the question and the answer. Cavill’s answer was to a question about if BvS was good or not. Jones’ answer is to a question about representation.

The interviewer at Metro asked Jones if his casting was “racially uncomfortable.” Jones answered that the decision was “made for the fans,” like all other decisions that he claims went into the making of the series. His claim here seems to be that Marvel decided to cast a blonde, blue eyed, white man, in the role of Danny Rand because that is how fans of the comic book would expect Danny Rand to look.

Again, like on the issue of Iron Fist as a white savior, Mr. Jones is not incorrect. But not being wrong does not make him right. And it is not to say he isn’t an asshole. In both of these instances, Jones fixates on the factual truth of a particular point. 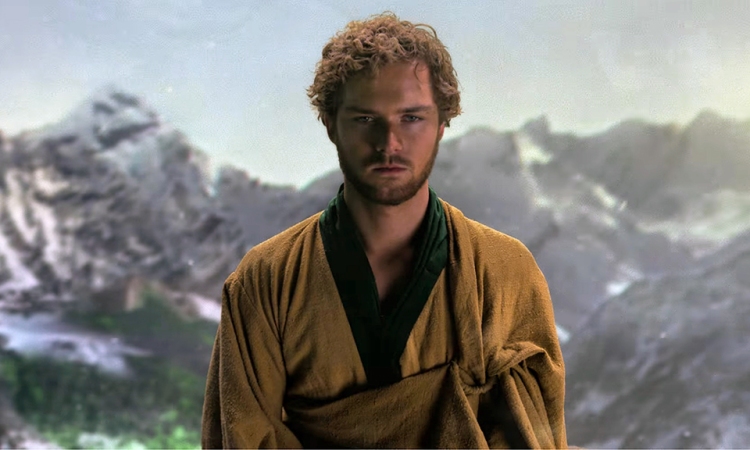 When he is asked specifically about the cultural representation in Iron Fist, Jones says all the right things. It is obviously possible that he has been trained by the Marvel PR machine to regurgitate the party line. He is an actor after all. But he seems to genuinely care about the issue. Which is why it is so baffling when he fails to recognize that the issue continues to exist even when nobody has expressly brought it up to him.

The other thing that seems worth remembering is that Finn Jones is not responsible for the show. He was hired to play the lead character. He did not make the decision to keep Danny Rand white. He did not write the show or even greenlight the project at Marvel. There’s an abundance of people who would have had a job no matter what Iron Fist did with the racial makeup of the title character.

Regardless of that, we arrive at the newest publicity nightmare for Mr. Jones. Earlier this week, he claimed that the current political climate had turned people against his character in Iron Fist. When asked about the reception the show was getting, Jones said

“I think the world has changed a lot since we were filming that television show… I’m playing a white American billionaire superhero, at a time when the white American billionaire archetype is public enemy number one, especially in the US… We filmed the show way before Trump’s election, and I think it’s very interesting to see how that perception, now that Trump’s in power, how it makes it very difficult to root for someone coming from white privilege, when that archetype is public enemy number one.”

Again, Mr. Jones seems to be either unable or unwilling to consider context. There has been uproar around his casting in Iron Fist since well before the 2016 election. And it seems probable that critics are basing their opinion on the show more on the show’s quality than on the presidency. If critics are not able to dislodge their minds from current events while watching Danny Rand use his super Chi punching powers on a dragon, then it’s because the show is bad.

In the comics, Iron Fist teams up with Luke Cage to form a superhero team called Heroes for Hire. The two characters form an interesting pairing because of their origins. While Danny Rand’s Iron Fist is a hair shy of being a white savior, Luke Cage’s Power Man is every bit a product of Blaxploitation.

But when Marvel and Netflix produced Luke Cage last year, it was only to heaps of praise. And that isn’t because of some imagined anti-white bias in the “liberal media.” It’s because of context. Aspects of Blaxploitation lasted from the comics into the show on Luke Cage. But those elements of the show stood alongside three-dimensional characters, acted beautifully. Characters who occupied an entire world in Marvel’s Harlem.

What’s more, the real world context shaped the reception of the show even more. The image of a bullet-proof black man on a mission to buck the system which oppressed him was mesmerizing in the wake of 2016. The problems can slip away when you surround them with enough high-quality work and interesting artistic thought.

Although  Luke Cage benefited from the same cultural circumstances which hinder Iron Fist, the fundamental truth behind both of them is the same. They need to be able to stand alone as pieces of entertainment. Luke Cage is as close as Marvel has come to a perfect piece of art. Taking politics into account only empowers something that is already fantastic.

Iron Fist needs to be able to stand alone as well. If it cannot, then it is not good. But critics using politics as a reason to force its quality down is no more useful than Jones trying to use politics as a reason to inflate it. Iron Fist looks like it will be the least impressive outing of a Defender so far, which is unfortunate. But with critics and supporters whipped up into such a political frenzy on both sides of the argument, the best way to figure out the show’s quality will probably just be to watch it.

Iron Fist Season 1 is now streaming all 13 episodes on Netflix.